Wanderlust: Rebirth is a top-down RPG. You get to name your character and choose from one of four classes. The classes included in this game are fairly basic, you have the Fighter, who is meant to deal lots of damage to whatever is in front of it. You can also choose the Alchemist, the ninja-like character who uses his dash attack to get in throw a bomb and get out, this character is great at avoiding damage and dealing it to small bunches of enemies. Another character is the Cleric, a character who can take damage like the fighter, but can heal, maing it a great tank and support character. Lastly there is the Elementalist, the mage character, who can use a variety of spells. The Elementalist is a complicated character, who’s skill progression depends on the runes you choose to take, and it is the only character who’s attacks are controlled through the use of the mouse. For the elementalist, you must also go through an extra process in order to pick your spells, you must select the runes that the spell requires in while holding down the right mouse button. While this process may seem like a hassle compared to just picking through a menu, it is actually a lot quicker if you can memorise the order.
Character progression is also quite impressive. You do not recieve experience for killing monsters, instead, every time you complete a chapter you are awarded with Character Points dependant on your skill. The base amount you recieve is 50, but if you do really well on a stage you can get up to 100 CP. This form of character progression is really nice as it rewards those with skill rather than those who level grind longer than the rest. It also gives the game replayability as it is quite difficult, and it is quite hard to do massive damage until you’ve completed a few chapters with low scores. The reason for this is because you are awarded points for killing bosses and stronger enemies, and this will be nearly impossible for anybody who is without other players or AI companions. Speaking of the companions, they are a bit too powerful, taking a lot of fun out of the game during a fight, almost making it feel like you are playing the game with a people who are many chapters ahead of you, so it is recommended that you play with actual people who are at your point in the game, which is easiest to do when you plan ahead with your friends. 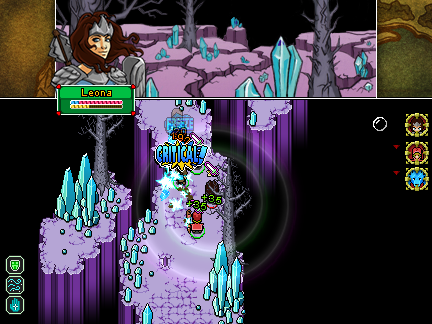 The gameplay and character progression aren’t the only good things about this game though, the retro art and sound style make this game feel great. The variety of creatures, and sprites for all characters, for both male and female versions show that the developers really tried hard to make this game the best they could. There are no clashing graphics, even with all the flashy effects and characters, although, the sound effects seem not to have as much effort put into them. Although they sound nice, the in Wanderlust: Rebirth aren’t varied, and one may end up getting a little bothered by hearing the repeating sounds. The only problem I had on the artistic side though was that the HUD took up a large chunk of the screen, when a lot of what was there was unneeded. These problems are only minor nitpicks though, and it definetly does not take too much from the quality of the game as it is focused mostly on gameplay.
While Wanderlust: Rebirth is great overall, the story itself is quite light-hearted, and a bit on the weaker side. The story isn’t bad, but it seems to be kept short as not too keep players away from the gameplay. Players can also skip the story by rapidly skipping through each dialogue box, making this game fun for those who would not like to read while playing, that’s not to say it’s a hassle to read through it all, as characters do not talk for long. There is still enough for the story though, to allow players to take in the light-heartedness, and humour this game has to offer. The game starts after your character recieves a letter to go to an arena, where they will fight a glorious battle. After winning the tournament, a few mistakes are made, and you are forced to walk all the way to another town in order to get your prize, but of course, there is trouble along the way.

In conclusion, Wanderlust: Rebirth is a fun game meant to be played with friends. Even with it’s small problems, the game is still quite fun to play, and the first 3 chapters are free, so giving it a test before you buy won’t be hard to do. With it’s great gameplay mechanics, innovative character mechanics, and great art, this game is something I recommend to all RPG fans.
You can download the Wanderlust: Rebirth demo at http://gmc.yoyogames.com/index.php?showtopic=510692
Or you can  look for more info on the game and download the full version at http://www.wanderlustgame.com/